The top 5 gold producing countries in the world are China, Australia, Russia, the United States and Canada. The US was the fourth largest producer of gold in 2017, with approximately 7.88 ounces (245 Mt) of gold produced. Switzerland, China, United Kingdom, Hong Kong and India are the top five gold importing countries in the world, Switzerland being the largest importer. 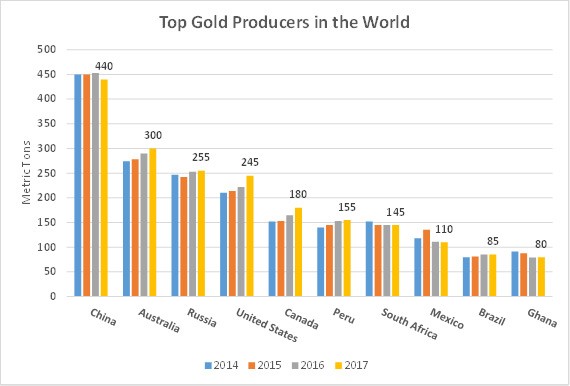 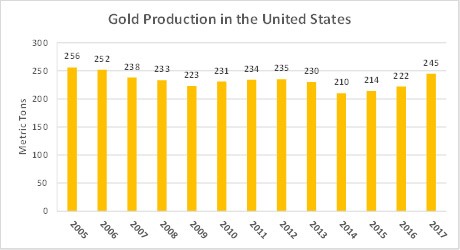 Most of the gold produced today in the US comes from large open-pit heap leach mines in Nevada. Gold is also produced from 40 lode mines, several large placer mines in Alaska, and numerous smaller placer mines (mainly in Alaska and in the Western States). About 6% of domestic gold was recovered as a by-product of processing domestic base metals ores - mainly from copper ores. The top 26 operations yielded more than 99% of the mined gold produced in the United States. Commercial grade gold was produced at about 15 refineries. In the United States, jewelry manufacturing was heavily concentrated in New York and Providence areas with lesser concentrations in California, Florida and Texas. The domestic uses of gold (excluding gold bullion bar) were jewellery - 38%, electrical and electronics - 34%, official coins - 22% and other uses 6%.

Three of the world's top ten producing gold mines are in the US and all of them are in Nevada: Carlin, Cortez and Goldstrike.

Goldstrike - owned and operated by Barrick Gold. The operation produces approximately 1.1 million ounces of gold at an all in sustaining costs per ounce of $714.

Cortez Mine - owned and operated by Barrick Gold. Cortez Mine is an open pit operation and produces approximately 1.06 million ounces of gold at an all in sustaining costs per ounce of $517.

Carlin Mine - Newmont Gold is the owner and operator of the Carlin Mine. The Carlin operations produce approximately 944,000 oz of gold from the three open pits and four underground mines.

Regarding US reserves, it is estimated that over 261.5 M ozs of gold are contained in vaults administered and housed by the Federal Reserve, the Treasury Department in New York City, Fort Knox and other locations. 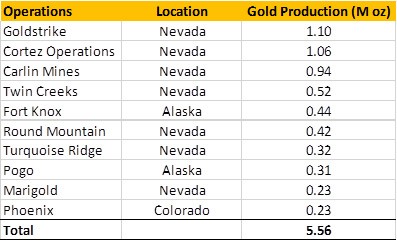 The US is also one of the largest gold exporters

The US is also the largest gold exporter in the world. The total value of the gold exported by the US in 2017 was approximately $17.7 Billion (480 Mt of gold). The United States continues to export more gold than it mines and imports.

Gold Exploration Budgets are on the rise

According to S&P Global Market Intelligence, there has been a rise in exploration budgets of more than 14% year over year to US$7.95 billion in 2017 - the first increase in the annual global nonferrous exploration budgets since 2012. The budget data indicates that, among all company types, the surviving junior companies made a comeback in 2017, increasing their aggregate exploration budget by 23% year over year. As was the case 15 years ago, when the industry began recovering from its previous extended downturn, an increase in gold exploration spending in 2017 is leading the industry out of the current slump. Benefiting from firmer metal prices since early 2016, junior gold exploration companies increased their aggregate budget by 22% year over year to US$4.05 billion in 2017.

In 2018 the US is expected to maintain its domestic gold production at the same level as 2017. The first new gold mine of 2018 in the United States is the Moss Mine in Arizona which is expected to produce 45,000 of Gold Equivalent oz per annum.

Gold Production in other countries

Large gold deposits are getting more and more difficult to find and produce, due to lower grades being mined and increasing operating costs for older mines. South Africa was once the world's biggest gold producer, with more than 75 % of all global reserves in 1970. The South African gold industry generated enormous wealth, paid for the construction of roads and railroads and made South Africa's economy the largest on the continent. Significant discoveries in South Africa pale in comparison to many other countries, reflecting the fact that most of the country's mines are very old and very deep. But look at how dramatically South Africa's production has fallen in recent decades. 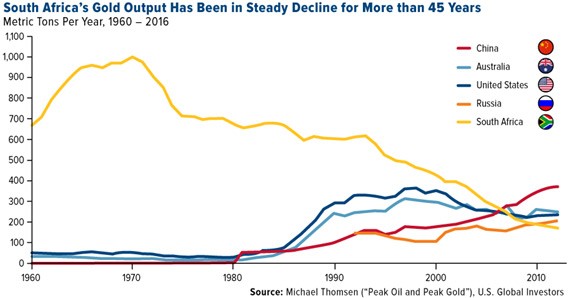 Meanwhile, Chinese gold production has been skyrocketing, as has Russia's. Even though the US maintains a strong position in world gold production, it has been eclipsed by China and could soon be surpassed by Russia too. The United States is capable of finding and producing more gold than any other country in the world, but in order to achieve this the American people and the US government need to decide to make increased gold reserves a top priority.